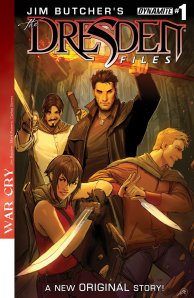 The Dresden Files: War Cry is a comic collection of the series written by Jim Butcher and Mark Powers. And while I have just begun my travels with Harry Dresden, I have to say that this tale was just as gripping and entertaining as Storm Front (which is the only book I’ve read in the series thus far.)

The story itself is set four months after the events depicted in Dead Beat, the 7th novel in The Dresden Files. As constant readers of the series will know, at this time, the White Council is waging what appears to be a losing war against the vampire forces of the Red Court. In fact, things are so desperate that they’ve “drafted” the inexperienced and the outcast wizards to help reinforce the ever thinning ranks of the Wardens.

Naturally, Harry Dresden, a wizard for hire from Chicago, is one of the misfits enlisted, even though the White Council has long viewed him with suspicion for things that happened in his past. But the threat from the Red Court being what it is, all that is temporarily forgiven, and Harry is sent out on a Warden mission.

And boy what a mission it is! Harry is dispatched with a small team of inexperienced Wardens to rescue a handful of mortals who live in a snow-covered town in the middle of nowhere.

Naturally, things start going wrong from the get-go for the group. First, Harry’s ever dependable car breaks down. Then they find that they have no time to evacuate the premises but must make their stand at the mortals home. And worst of all, no one, not even Harry, knows why they are doing this? Why these people are so important to the Red Court? Why the White Council wants to save them? And if these mortals are important, why did the Council only send Harry and a few misfit Wardens to protect them?

The story that develops from this setup is pure Harry Dresden fun. It reads like a comic version of a Dresden book. The dialogue between characters is the same. Harry’s internal monologue is the same. But here, that great Jim Butcher story is coupled with stellar artwork by Carlos Gomez, who absolutely captures the frenetic nature of the tale, bringing to life all the magic fights, the mystical creatures, and the characters themselves. And always, Jim Butcher adds just the right amount of narration and explanation to move the story along without detracting from the artwork.

To make it perfectly clear, I loved this comic collection. As a new fan of Harry Dresden, I found this story to be yet another example of how Jim Butcher has caught lightning in a bottle with this urban fantasy hero, allowing him to turn even the simplest story into something very Wow! worthy. I highly recommend this one to all Dresden fans, urban fantasy fans, and lovers of great stories!

I received this ARC from Netgalley and the publisher in exchange for a fair and honest review. I’d like to thank them both for allowing me to receive this review copy and inform everyone that the review you have read is my opinion alone.