FUN DAY MONDAY, OR THE BOOKS THAT WILL HELP ME SURVIVE THE WEEK AHEAD (SEPTEMBER 22, 2014)

The work week begins. Time for me to strap on my business suit and head back into the office to save the world one case at a time. And helping me forget about all the trials and tribulations of life will be a few books that I hope are really, really good. So without any further talking, here are a few indie novels that I’ll be reading this week.

In his debut novel, Brett catapults readers into a world in which demons rise at night and the human population lives in fear and seclusion. Only those who brave the unsheltered night and survive see what lies beyond their birth town or city. The setting itself is spare and underdeveloped with the focus instead being on the flawed heroes of the tale. Brett spends a majority of the novel—the first of a series—establishing the backstories of the main characters, three humans who come from different towns and backgrounds and are thrown into the battle at a young age. Readers are held in suspense until the three finally meet. Brett uses the demons and magic to examine issues prevalent in our own society, such as religion versus science. The book is captivating and well written, quickly drawing readers in. The Warded Man is a must-read for anyone looking for a new fantasy world to explore.— Kelliann Bogan, Colby-Sawyer College, New London, NH

SCOURGE OF THE BETRAYER (BLOODSOUNDER’S ARC #1) by JEFF SALYARDS 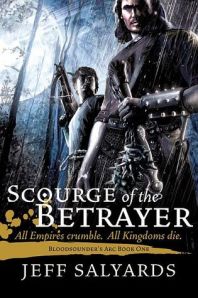 Many tales are told of the Syldoon Empire and its fearsome soldiers, who are known throughout the world for their treachery and atrocities. Some say that the Syldoon eat virgins and babies–or perhaps their own mothers. Arkamondos, a bookish young scribe, suspects that the Syldoon’s dire reputation may have grown in the retelling, but he’s about to find out for himself.

Hired to chronicle the exploits of a band of rugged Syldoon warriors, Arki finds himself both frightened and fascinated by the men’s enigmatic leader, Captain Braylar Killcoin. A secretive, mercurial figure haunted by the memories of those he’s killed with his deadly flail, Braylar has already disposed of at least one impertinent scribe … and Arki might be next.

Archiving the mundane doings of millers and merchants was tedious, but at least it was safe. As Arki heads off on a mysterious mission into parts unknown, in the company of the coarse, bloody-minded Syldoon, he is promised a chance to finally record an historic adventure well worth the telling, but first he must survive the experience!

A gripping military fantasy in the tradition of Glen Cook, Scourge of the Betrayer explores the brutal politics of Empire–and the searing impact of violence and dark magic on a man’s soul. — Goodreads

BUY THE BOOK AT AMAZON

What will you be reading?

This entry was posted in Fantasy, Funday Monday and tagged BLOODSOUNDER'S ARC, JEFF SALYARDS, Peter V. Brett, SCOURGE OF THE BETRAYER, THE DEMON CYCLE, THE WARDED MAN. Bookmark the permalink.

5 Responses to FUN DAY MONDAY, OR THE BOOKS THAT WILL HELP ME SURVIVE THE WEEK AHEAD (SEPTEMBER 22, 2014)