THE WOUNDED by JAMES A. MOORE (A SEVEN FORGES STORY) 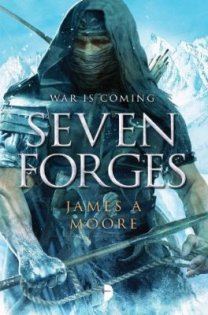 The Wounded by James A. Moore

The Wounded is a short story that follows Kallir Lundt: a minor character in Seven Forges who was mortally injured at the beginning of the book and never heard from again.

For those of you who have not read Seven Forges as of yet, the story told there focuses on Captain Merros Dulver, who is leading a small group of adventurers toward a range of unexplored mountains called the Seven Forges. The blasted lands that the group must transverse is a frozen wasteland, wind blasted, and devoid of life; facts that have made it an impenetrable barrier for anyone from the Empire of Fellein – which controls the majority of the known world – ever reaching these legendary peaks, let alone, exploring them. But, naturally, someone offered Merros a lot of money to come out of his well earned military retirement to do just that, so he and a handpicked group of people are freezing their butts off and wandering around in the wastes.

Soon, however, Captain Dulver realizes the Blasted Lands are not so uninhabited, as his band of adventurers is confronted by horrible beasts that come near to killing them and who horribly wound and disfigure one Kallir Lundt. Luckily, for Captain Dulver, an unknown race of people called the Sa’ba Taalor find them in the waste, lead them into their sheltered homeland in the Seven Forges and are seemingly happy to meet their unknown neighbors.

After becoming acquainted with one another, Captain Dulver’s band and a group of the Sa’ba Taalor leave the Seven Forges to travel back to the Fellein Empire. The plan to introduce these mysterious people to the rest of the world. Kallir is still drifting near unto death, however, and so he is left behind in the care of the Sa’ba Taalor, who claim that their gods can heal the mortally wounded man.

But what secrets are these unknown people hiding? Can they really heal Kallir from his mortal wounds? And even if they can, why are they doing so?

While this is a short story, it does a wonderful job of helping to answer those questions and reveal more about these interesting people called the Sa’ba Taalor and their mysterious homeland and culture. It also does an excellent job of introducing us to Kallir Lundt, who I believed was just another red shirt in a Star Trek episode, but who – after this tale and The Blasted Lands – seems to be a character who might play a bigger role in forthcoming books.

This one is recommended for fans of the series or those who have read Seven Forges. Other readers probably will not appreciate this unknown story of Kallir Lundt as much.

Purchase the novels at Amazon.