THE GARDEN OF STONES (PART 1 OF ECHOES OF EMPIRE) by MARK T. BARNES 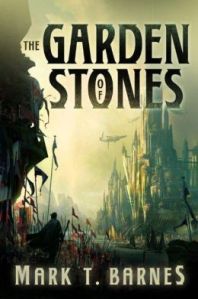 The Garden of Stones is the first installment in the Echoes of Empire fantasy series by Mark T. Barnes, and it is quite simply a spectacular concoction imbued with potential brilliance.

From the very first page of this epic, Mr. Barnes immerses his first time reader in a world filled with vivid cultures, unusual species, ancient mysteries, and complex characters. Through beautifully worded descriptions, he unveils an original fantasy landscape, filled with amazing details. A land so richly-imagined and so complex, drawing on concepts and imagery that are so fresh and original, that a casual reader may find themselves caught up in the deluge of fantastical races, names, and places and begin to flounder in this sweeping tide. However, if you can fight against the surge of information and steady yourself by latching onto and constantly referring to the glossary, you will bob to the surface and settle down into a steady rhythm of reading and glossary checking. Once this equilibrium has began, the story that Mr. Barnes pens will quickly carry you away.

The tale itself is set in Shrian, a civilization dominated by a diverse ecosystem of peoples. At the top of the peeking order are two non-humans races called the Seethe and the Avan. The Seethe, or Wind-Masters, have feathers in place of their hair and are the “creators” of the Avan, who were designed to be the Seethe’s servants but ultimately became their masters. Joining these two races upon the world stage are many unique and varied creatures including the Iphyri “giant men with the heads, legs, and tails of horses,” Wyvern riders, Tau-se (lion-like people), and Fenlings, who reminded me a great deal of Warhammer’s Skaven. The newcomer to this diverse environment is Man, who arrived from the stars in their ships long ago.

Among the Shrian culture, there is no shortage of “magic” though it is not the type most fantasy readers are accustom to. Here it is labeled “disentropy” and is described as “the energy of creation generated by all living things, eddied and swirling” within the air itself. But more than that, the users of disentropy are described as using “numbers” cascading through their mind to create three dimensional image as they attempt to influence the worldly elements and string together form from chaos. A description that reminded me more of the “force” in Star Wars than any magic system I’ve encountered in fantasy literature. But the magical wonders do not stop with disentropy itself, because Mr. Barnes unveils mighty machines such as flying ships, time portals, cloning engines, rifle-like guns, and other marvels of a highly advanced technology. Technology that was developed and partially lost in cataclysmic events of the past.

This lost past opens up yet another avenue for Mr. Barnes to world build, as he slowly reveals an extensive and elaborate history. A past which stretches out thousands and thousands of years behind these people, filled with world-spanning empires, cataclysmic events, forgotten technologies, eternal spirits, and ancient enmities. Enmities that are still at play in the current world, fueled by the Great Houses of nobility who via with one another for power and fan the flames of ancient grudges. This world building setting in place a combustible mixture ripe for an epic explosion of conflict and adventure.

A reader’s tour guides through this epic world are no less interesting than the land upon which they reside. The central character is Indris, called “Dragon-Eyed.” He is a prince from the Great House of Nasarat and a former knight of the Seq Order of Scholars. Though among the mighty of the warrior-poets, he abandoned his calling to marry the woman he loved only to loose her. Now, still grieving from her presumed death, he has become a daimahjin (a mercenary warrior-mage) and come to Amnon to aid his father-in-law, Rahn Far-ad-din, who is beset by political machinations at their finest.

The diabolical instigator of Indris’ problems is one Corajidin, who is the leader of the Great House of Erebus in the Shrianese Federation. Although he is losing hold of sanity and more than likely dying, Corajidin will not relinquish power but wishes to fulfill a prophecy he was given, believing that he is destined to be the next Asrahn (High King) of Shrian, Ruler of all the Great Houses belonging to the Federation. All that stands between him and his desire is Far-ad-din, Indris, and his growing insanity.

To further complicate things, we have a forbidden relationship between Indris and Corajidin’s daughter, Mariam “Queen of Swords,”which forces her to make an impossible decision to aid her father or her lover.

From all these different ingredients, Mr. Barnes serves up a fantasy feast of epic proportions. No one beginning this novel should view it as anything resembling a fast, casual read, but undertake it as if you were beginning The Wheel of Time, The Malazan series or A Song of Fire and Ice. Also, please understand that this is no YA novel but an adult one. Throughout this story, Mr. Barnes tells his story through multiple points of view; there is political intrigue resembling a game-within-a-game chess match; sexual situations do get explored; violence and bloody mayhem rule the day many chapters; and there is lots of grey morality exhibited by both the “good guys” and the “bad guys.” If all of that sounds good to you then this is an epic fantasy you must read.

Having said all of this, I want to explain why I only gave this book 3 stars, which in my rating system means that I “liked” the book.

Quite simply, the pacing of the story was too slow for me. While I understand that Mr. Barnes had to accomplish a massive amount of world building to setup the actual plot, it still doesn’t excuse the plodding nature of much of the narrative. This story just crawled at times. And the big showdown between Indris and Corajidin, which is set up and begins to build from the first page, was unnecessarily delayed by minor subplots. I have no problem with there being numerous subplots going on in an “epic” novel like this, but these side issues should either buildup the final showdown or be more in the nature of foreshadowing future events. Here we had unimportant – at least in this novel – characters taking up massive amounts of time for no apparent reason. Later in the series, Mr. Barnes may show me the error of my assumptions, but as of right now, I do not understand what the point was for them and view them as filler material.

Other than this one complaint, I enjoyed The Garden of Stones. It was a fresh, original approach to epic fantasy. Sure it appears to borrow a few concepts from other fictional works, but Mr. Barnes does a great job of incorporating enough new ideas to make this no copycat work. Plus, I absolutely loved the twist at the end of the book and can’t wait to see what happens with Indris going forward.

Purchase this novel at Amazon.

9 Responses to THE GARDEN OF STONES (PART 1 OF ECHOES OF EMPIRE) by MARK T. BARNES