THE GODBORN by PAUL S. KEMP 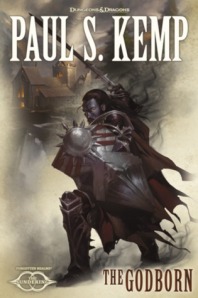 The Godborn is book two of The Sundering; a multi-volume, world-changing event taking place in the Forgotten Realms. The first book of the series was The Companions by R.A. Salvatore, where a reader continues – or begins – his journey with Drizzt Do’Urden. But though both books deal with circumstances of “the Sundering” of worlds, there is no real requirement that one must finish The Companions to enjoy The Godborn. Indeed, the novels in The Sundering series do not appear to be sequential nor build upon one another. All the tales have in common are their setting within the Forgotten Realms and the fact that they each reveal important canon changes within the world or deal with notable characters of the Forgotten Realms. Other than that, these novels are stand alone stories that succeed or fail solely upon their own merits.

The Godborn itself focuses on the story of Vasen, Erevis Cale’s son. (Erevis Cale being one of the heroes of the Twilight Wars Trilogy, where he, Drasek Riven, and Magadon, a half-demon mind mage, fought to stop a shade named Rivalen from bringing about the end of the world by releasing Shar, the Lady of Loss, into the world.) Vasen is a half-human, half-shade whose mother was transported into the future to give birth to him, because prophecy foretold that he would play a pivotal role in the ultimate confrontation between light and dark.

After his mother’s death at his birth, Vasen is raised by followers of the divine Amaunator, god of the dawn, at their hidden Abbey of the Rose. And though he bears the unmistakable marks of his shade heritage, he is raised by his adopted father to be strong in his service and love for the light. A paradox which might tear a weaker man apart, but a fact that only strengthens Vasen, as he becomes a man comfortable both within the darkness and the light. Accepted by both yet never wholly owned by either. A wildcard that is destined to decide the fate of the world.

Throughout his unusual life, Vasen is haunted by visions of his father; a man he never knew and whom he knows nothing about, yet still the dreams come to him, demanding that he rescue this stranger from some imprisonment. And while the desire to discover this unknown father holds some value to Vasen, he has responsibilities to the divine Amaunator, and he finds reasons to push the visions to the side, telling himself he will deal with them another day. However, soon fate intervenes against Vasen, as other forces begin scrounging the lands looking for the son of Erevis Cale!

One of these forces take the form of Sayeed and Zeeahd; two brothers who slither across the world, spreading horror and violence at every step. Their only mission, their only desire in life to find Erevis Cale’s son for a demon lord. Their reward for services rendered: a promise that their miserable, cursed existence will finally end in a painless death!

And so our steadfast Vasen finds himself forced to begin his journey to find a father he never knew and toward a destiny he never even knew he had. A destiny that brings him into contact with his father’s old friends and promises to resolve the ultimate fate of the world!

For a casual reader, The Godborn is an intriguing fantasy story with both good characters and evil ones fighting for the fate of the world itself. Mr. Kemp has penned a well paced tale that has a good bit of interesting back story, intense and vividly described horror elements, and an epic ending. Without a doubt, it is well worth a read for entertainment value alone.

For longtime readers of Paul S. Kemp’s Twilight Wars novels, this book is the culmination of that whole epic storyline. They get to discover if Erevis Cale will live or die. Whether the god Mask triumphs over Shar. And how all their favorite characters fit into the new Forgotten Realms that is being built by the Sundering. All in all, Mr. Kemp does a fine job bringing closure to the old plots while creating a whole new beginning.

No matter which category a fantasy reader falls into however, this novel is well worth a read!

Wizards of the Coast and Netgalley provided this book to me for free in return for an honest review. The review above was not paid for or influenced in any way by any person, entity or organization, but is my own personal opinions.

5 Responses to THE GODBORN by PAUL S. KEMP