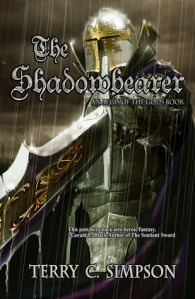 The Shadowbearer is a prequel to Terry C. Simpson’s Aegis of the Gods fantasy series, and while it has some shortcomings, it does an excellent job of introducing a reader to this world of Mater (magic) while telling a tale filled with warfare and politics, intrigue and treachery, heroic characters and vile creatures. Throw in a bit of world building and magic system description and you have a story that is well worth a try.

The novella is told through the eyes of one Stefan Dorn “the Steadfast”, Knight Commander of the Setian Empire and beloved friend to King Nerian the Lightbearer. Stefan has led the Setian warhost for years; his warriors having waded through rivers of blood for him and their people, carving out an empire for their king, and in doing so having become immortalized as The Unvanquished. And now, they find themselves on the cusp of final victory; their endless wars complete with one final victory. Peace and glory almost within their grasp.

But like all things, Stefan and the Unvanquished’s well earned peace begins to slip away even as they reach for it, because things are not well with their beloved King Nerian. Stefan himself can sense it upon his return home, but soon, he learns things are even worse than he had feared: suspicion, accusations, and intrigue disrupting the once tranquil landscape of the capital. And so Stefan finds himself caught between his lifelong love and respect for Nerian and his growing suspicions that madness lurks behind the eyes of the Lightbearer.

Never having read Mr. Simpson’s Aegis of the Gods, this was my introduction to that fantasy world, and I enjoyed my time there. But as I alluded to earlier, there were a few problems I had with the novella as a whole and would feel remiss without pointing out.

One, the magic system was very difficult to actually understand, not because Mr. Simpson did not attempt to explain it but rather that it was too convoluted, too complex perhaps.

Two, the world of Denestia is large, filled with history and lore, but in a novella, there was just not enough room to world building effectively, and so Mr. Simpson was forced to throw too much information at a reader, which – at least in my case – caused me to flounder around wondering who was who too many times.

Third – and lastly – there is a time shift about halfway through the novella, where the tale of Stefan jumps ahead in time over a decade. Now, while I understand that the author was forced to do this to finish the story, it ruined what had been developing into an intriguing plot for me.

To summarize, this is a novella well worth a try, even with its flaws, and it did intrigue me enough to consider downloading the first book in the series Etchings of Power and giving Aegis of the Gods a try.

2 Responses to Shadowbearer Is Good