Today, I’m happy to have my son, Connor, return to the blog after a long hiatus.  While these appearances are not as frequent as they once were, I always am thankfully whenever he puts the xbox controller down long enough to read a graphic novel and write down a few thoughts.

I just want to start this by admitting I love Green Lantern graphic novels, comics, or tv series.  I also prefer Hal Jordan, because that is the GL I have always seen in my life in the movies or tv.  So when I found out this graphic novel was all about the other human GL’s like John Stewart and Guy Gardner I wasn’t really sure about it.  I still wanted to give it a try since Green Lanterns are usual cool no matter what, and let’s just say it didn’t disappoint.  The book answering one of my main questions about the GL Corps: Where does the lantern go and come from whenever a GL needs a quick charge for the power ring?

The story doesn’t start out about lanterns though.  It begins with John Stewart and Guy Gardner (two of many protectors for Sector 2614) trying to have a normal life with a 9 to 5 job. Problem is they already have a full time job being a lantern, and our two GLs need to accept what they are. 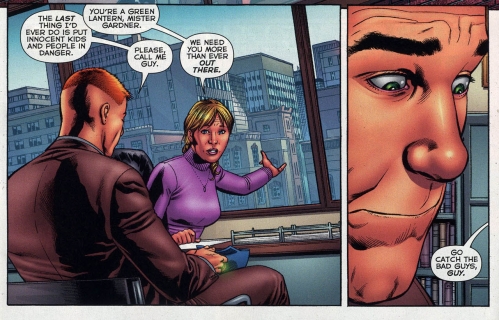 This time around normal life is interrupted by a mysterious people who are destroying world after world.  Who these world killers really are and why they are doing this are completely unknown to Guy or John.  Of course, the Guardians are less than useless, since they won’t reveal anything they might or might not know for some weird reason. And, so, our lanterns go out on a search and destroy mission.

Now, overall, I liked the book.  Sure, there was some negative stuff, but I’ll get to that in a minute.  Let’s talk about the good first.

Great art here.  I love the art team of Fernando Pasarin and Scott Hanna.  They did such a great job with the illustrations in this book.  I know it must be hard to draw all those alien worlds as well as they did, but all their hard work made this one beautiful. 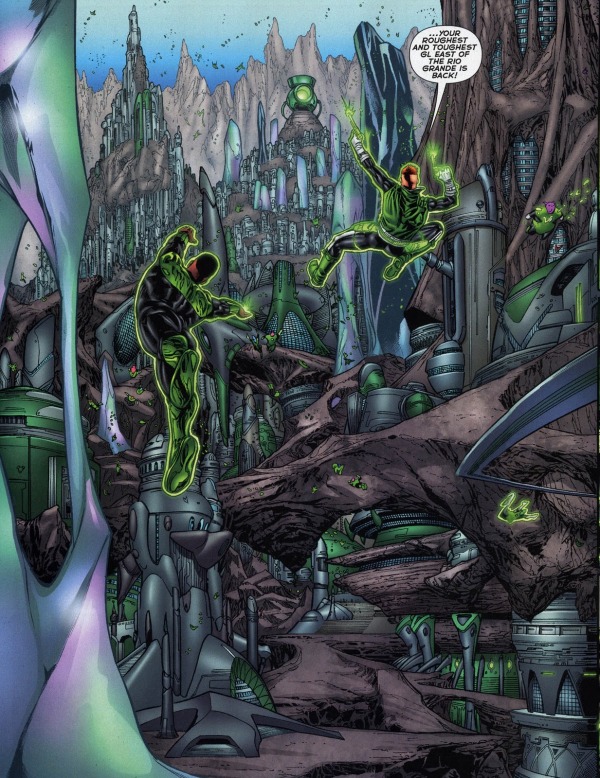 Great story.  Peter J. Tomasi had a cool plot idea and goes for it.  The story starts off very mysterious with no one knowing who the destroyers of the planets are and why they are doing this.  I especially loved the way the mystery drove the book and let me see Guy and John do some detective type stuff instead of just getting into a non-stop ring battle with some rampaging alien.

Now for the dreaded negatives I have with the book.

Let’s start off with the bad guys.  I’m not going to mention who they are or why they are doing what they do, but I just have to say that one of their special abilities was really confusing.  I just didn’t get Tomasi’s explanation at all.  It didn’t make much sense and seemed more like an excuse for why they could resist the GL Corps than anything else.

My next complaint is probably me being picky, but this was a Green Lantern story with no appearance at all by Hal Jordan.  I don’t remember what the excuse was for Hal not to be around, but it was something like him being off on some mission or something.  Problem is that a GL Corps book isn’t a GL book without Hal at least showing up a little.  How hard would it have been for him have been in the book at the beginning? Like I said, it is me being picky.

Lastly, I didn’t like this version of Guy.  He was much too chill.  I’ve always seen Guy be an obnoxious and angry person, insulting and fighting with everyone around him.  That is Guy.  Here he did not go off at anyone once in the entire story.  I kept wondering when Tomasi was going to reveal the real Guy Gardner. 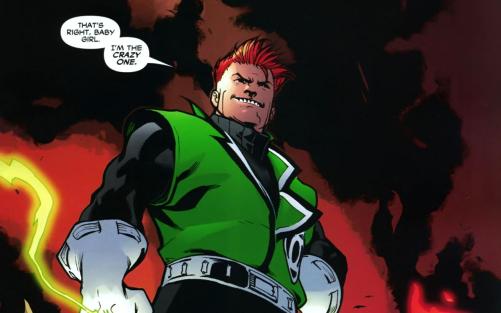 So, okay, I didn’t like everything about this book, but it was still a pretty good story.  Thanks for reading this review. Thanks for not getting mad over my opinion being different from yours.  And if you are on Goodreads, friend me any time to talk about my reviews or comic books in general.

Connor is a teenager who enjoys graphic novels (DC Comics are preferred!), superhero movies (He is counting the days down until Avengers Infinity War.), watching episodes of The Flash and Arrow,  is a “beast” on Injustice 2, will happily accept any and all caps (because you just can’t have too many caps), and whose favorite music right now revolves around Warrant and 80s hair metal.  And, no, Connor did not have any input into my paragraph about him.  Being a dad does have it’s privileges.

This entry was posted in 4 Stars, DC, Graphic Novels, Green Lantern, The New 52. Bookmark the permalink.