KILLING IS MY BUSINESS 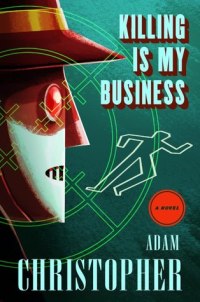 Killing Is My Business by Adam Christopher

Killing is My Business is the sequel to Adam Christopher’s Made to Kill; this series a genre blender where mystery noir and science fiction blend perfectly into a concoction all its own. Some reviewers have even suggested this story reads like a 1960s era steampunk-esque adventure, which I can certainly understand, but no matter what label you place on Killing it is just a damn fun book to read.

Ray Electromatic is the last robot on Earth; all of the rest of his kind (and there once was a world full of them) long gone to the scrap heaps. And since his original programming as a detective is not in high demand, Ray’s handler Ada (a 1960s era supercomputer with room size modules and miles of magnetic tape) has begun hiring him out as a robot assassin of sorts. Ray excelling at his new career, working for the mob mainly, and finding himself in high demand.

But Ray is a robot with limitations. Every night he must recharge his batteries and have his memory wiped by Ada, because his memory module only holds 24 hours worth of data. Each sunrise finding our robot killer awakening to a new world with only Ada’s morning briefing to give him the information he needs for another day. So it isn’t too far from the truth to say Ray gets to rediscover the world each and every day.

In Killing is My Business, Ray finds himself hired by a Don whom he saved from a nasty bloodbath at a restaurant. The assignment to infiltrate a gang and off the mob boss. What ensues is a mysterious scheme, femme fatales, g-men, car chases, fake identities, murder, more murder, and a cool conclusion to it all.

As a lover of genre blender fiction, it probably comes as no surprise that I really enjoyed this story. We all crave something different in our reading, and Adam Christopher’s blending of mystery noir and science fiction really gave me that. What was even more surprising was that I loved the mystery elements here more than the sci fi. Strange, I know, because I don’t read many mystery novels. But here it was the whodunit elements which I found the most fun, which kept me thinking, and which made me want to keep turning pages to find out what would happen next.

The only thing I didn’t completely love about the book was the final reveal. I saw it coming and desperately wished I was wrong. For that reason I can’t give the book a five star rating, but other than that, I can’t complain about anything.

Killing is My Business is a cool, fun book. It is a mystery starring a robot in a steampunk-esque 1960s. If that description by itself doesn’t make you want to give this series a try I don’t know what will. Highly recommended!

1 Response to KILLING IS MY BUSINESS