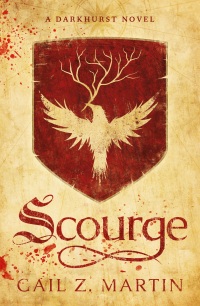 Gail Z. Martin’s newest novel Scourge is a fantasy version of Supernatural.  This story combining the familial relationship of brothers with monster hunting and more than a dash of political machinations and vile blood magic to craft yet another fine fantasy from this prolific writer.  And while it does contain quite a bit of world building, it is sure to satisfy Martin’s fans and create more than a few new ones.

The linchpins of the tale are the Valmonde brothers; these three, young men having inherited the family business when their mother was horribly killed and their father died a mysterious death.  Working as guild undertakers in the city-state of Ravenwood, Corran, Rigan, and Kell use rituals, religious ceremonies and more than a little magic to set the souls of the dead free and keep them from returning to the living as ghouls.  But most of their time is spent arguing with one another, dealing with their personal issues, and desperately trying to make enough money to pay bribes to the city guard, yet still have enough left over to survive another day.

As for the brothers’ home city of Ravenwood, it isn’t exactly what it seems from outside its gilded gates.  Certainly, it is a civilized land ruled by merchant princes, mayors, and powerful guilds, where the business of trade and the making of gold rules all, but even here there is a worsening plague of creatures terrorizing the citizens.  Ghouls lurking in the shadows; other — even more foul — monsters springing up to maim and kill, while the city guard seemingly does nothing.  All of which causes the Valmonde brothers to become embroiled in the dangerous business of monster hunting and forbidden magic.

Intertwined with our three brothers tale is the doings of the Lord Mayor Machison.  This devious, power-hungry man about as despicable as one can get.  His scheming, political maneuvering and callous use of power hiding a greater secret, one which involves trade and power, wealth and magic!

As always, the strength of Gail Z. Martin’s writing is her ability to craft likable main characters; people who draw you in and demand that you follow along with them through the story.  The Valmonde brothers fitting this description perfectly.  Corran, Rigan, and Kell very realistic people who have strengths and flaws, dreams and failures, which transform them into living, breathing people, whom a reader will learn to care for and desperate hope succeed.

The other highlight of the book is the different flavor of medieval society presented.  Yes, it is still European in nature, but instead of the fairly pedestrian feudal monarchies of so many fantasy offerings, Scourge‘s world is ruled by merchant princes, revolves around trade pacts and includes powerful guilds with intricate politics involved in every facet of life.  It is difficult for the author to set this all up, especially since it isn’t juicy stuff, but once Gail Z. Martin lays a firm foundation for this society in the first half of the book it really becomes very enjoyable experiencing something a bit different.

The only issue I had with Scourge was the length of the narrative.  Many times the expositions on the world and its economic system seemed a bit too lengthy.  This was more apparent during the Lord Mayor’s sections of the book than the Valmonde brothers, but it reared its head quite often.  I completely understand why the author had to spend time explaining this unique city-state, its rulers, and the guilds, but I wish there had been a more organic, exciting way of handling it.