RUN! RUN! THE DOPPELS HAVE ESCAPED AND THE MADNESS IS COMING! IT’S COMING!

Oh, hell, it is already here. And that is a good thing.  You see, Manifest Delusion Madness has arrived at Bookwraiths and is going to be with us through Christmas. Each and every day dedicated to letting everyone know all about Michael R. Fletcher’s amazing grimdark series, Manifest Delusions. So keep checking back each day as we try to fill this week with tons of interesting and intriguing information for you! 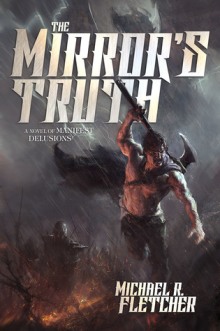 Where belief defines reality, delusions are both strength and curse: The deeper you sink into madness the more powerful you become. But that power comes with a price. Your darkest nightmares hunt you at night. The face in the mirror hates you and wants to be free. Your fears manifest and plot your destruction.

Bedeckt defined himself by the list of crimes he was unwilling to commit. It was such a short list. How could straying from it have gone so wrong?

Now Bedeckt must undo the damage caused by wandering from his precious list. The Geborene god seeks to remake the world with his obsessive need for cleanliness and perfection, but Bedeckt is going to bring him down. Nothing can stop him. Not even death.

The two friends he abandoned in the Afterdeath chase after Bedeckt, bent on revenge. Psychotic assassins hunt him. Something cold and evil follows, lurking in the clouds above, shredding reality with its delusions. Madness and sanity war, stretching and tearing the very fabric of existence.

The dead shall rise.

Michael R. Fletcher is a science fiction and fantasy author. His novel, Beyond Redemption, a work of dark fantasy and rampant delusion, was published by HARPER Voyager and has garnered much praise among reviewers everywhere.  The Mirror’s Truth is the continuation of the story begun in Beyond Redemption.

Swarm and Steel, the next novel set in the world of Manifest Delusions, is set to be released by Talos Press (an imprint of Skyhorse/Night Shade Books) in August of 2017.

With thanks to the author, this giveaway will be for one autographed copy of Beyond Redemption and The Mirror’s Truth. This giveaway is open to residents of the US and Canada. To enter, check out the Rafflecopter giveaway.  The winner will be randomly selected, then be notified by email of your great victory!