Posted on November 1, 2016 by Bookwraiths

Okay, a great protagonist might be the most important character in a story, but a great villain is equally important.  At least, in my eyes.  And I have to admit that sometimes the villain is so good, so compelling, that his/her story is the real reason I pick up a book — especially if I can’t wait to see them killed horribly.

Anyway, here are a few of my favorites villains.

This villain begins what will is a favorite villain trait of mine: justifiable reasons for doing bad things.  Or to put it another way, this villain isn’t some psychopathic monster bent only on death and destruction. Not suggesting that Corajidin’s excuses for  his dastardly deeds exonerates him from his actions in this story, but, at least, he does have motivations, which explain his behavior and make him easier to empathize with.

Okay, I know many people look at Malekith, roll their eyes, and start saying he is a fantasy version of Darth Vader.  Definitely, there are some similarities (Horrible burns resulting in him being encased in black armor the most noticeable example), but this guy is such a compelling character in and of himself that he rises above any similarities.  Noble, arrogant, driven, and honorable (in his own way) he is a true friend to some yet does the most horrible evils.  Yet the whole time a reader wonders if there is any hope for redemption.  (Yeah, I know that sounds a lot like Vader too.)

Born an Abomination, Paul Atreides sister slowly succumbs to ancestral memories, becoming more power-hungry and devious.  Yet a reader can’t help but feel sympathy and understanding for her, because the actions of her mother and brother caused her condition, and as she slowly grows up her family abandons her.  Nope, it doesn’t make her any less creepy, but it does make her more interesting as a villain. 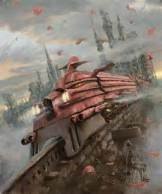 7. BLAINE THE MONO – THE DARK TOWER

This insane monorail train in Stephen King’s The Dark Tower was one amazing villain.  This intelligent yet suicidal transportation system really steals the scenes he is in, turning them into a weird mirror of Bilbo and Gollums’ riddle match in The Hobbit.  Yeah, “Blaine is a pain, and that is the truth” as Jake Chambers puts it, but damn, he is a cool one. 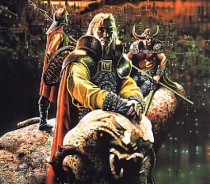 Madman, tyrant and would-be emperor, Biagio is a villain who goes through one of the more dramatic and enthralling evolutions in fantasy fiction.  At the beginning of this journey, I absolutely hated this guy, wanted to see him die painfully as soon as possible, but by the end of the trilogy, I found myself wanting him to succeed against my better judgment.

Yeah, this guy appears in many King novels, including The Dark Tower series, but his freaky, supernatural evilness is never so well done as his appearance in The Stand.  What makes him even more compelling is his smooth manners and messianic presentation, which includes him pretending to be a friend and mentor to all his minions.  He really reminds me of American politicians, I have to admit.

I know some people will point out that Lady is a much worse villain than Soulcatcher, who is merely her minion at the beginning of this series, and more deserving of being listed here, but my pick is Soulcatcher, who never shows any signs of a conscious or less than selfish motives.  Plus, I don’t have a crush on Soulcatcher. 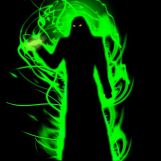 This villain is more in the Sauron mold, but he adds the extra dimension of making appearances in the narrative, spewing his venom, espousing his reasons why he is unjustly imprisoned on the world, and attempting to turn everyone to his side.  Nope, he never convinces me his vile actions are forgivable in the least, but I do get to know and hate him more than other I did Sauron.

Wherever Loki appears (Norse myths, novels, Marvel comics or movies) he steals the show.  I suppose that should not surprise me since he is the Trickster, but he has such a flair for evil that his machinations are always entertaining to follow.  Plus there is always the hint that he might be redeemable in time.  Yeah, I’m a sucker for the redemption theme.

God knows there have been lots of villains in Game of Thrones (books/movies) I have hated, but for whatever reason, Ramsay was the one I despised the most.  His demented treatment of everyone hit a raw nerve with me.  So much so that I am not ashamed to say I thought he died much too quickly and with insufficient suffering — though I did enjoy the concluding scene very much, as I had always wanted to see his smug expression ripped from his face.

Agree?  Disagree?  Have some villains to add to the list?  Let me know!