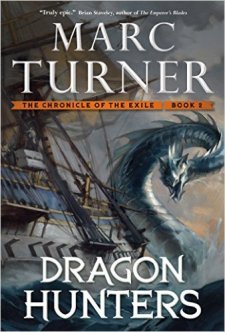 Series: The Chronicle of the Exile #2

Dragon Hunters is the second installment of Marc Turner’s epic The Chronicle of the Exile series, and, as promised by said author, it is a tale set in the same world as When the Heavens Fall but focused on a whole pantheon of new characters, filled with unique lands, cultures, and magic, and unveils an original story having no direct connection to its predecessor.  All of which means anyone can read this book and enjoy without having to do any catch-up regarding book one.

Now, for those unfamiliar with Mr. Turner, he has a penchant for throwing readers head first into the action, demanding them to quickly grasp and decipher the multiple viewpoint narrative as it rushes onward fast and furiously; a style which continues here, as the shadows fade away to show the Spider goddess in the thick of things, setting in motion a set of events which she promises will sweep the length of the Sabian League.  What her plan is or her goal is left to a reader’s imagination.

Quickly, the view changes to a prison cell somewhere.  Where, Senar Sol, Guardian of Erin Elal, doesn’t even know.  Ten months of his life (or close to it) spent in isolation; his only crime being forced through a gateway by Emperor Avallon and ending up in this strange place.  But now things have suddenly changed, as he is led forth from his entombment to meet his captor and set forth on an unexpected path.

Meanwhile, Karmel Flood of the Chameleon priesthood struggles with her skills being unappreciated by her brother the high priest.  Once, Karmel and Caval had bravely shared the abuse of their father together; the perpetual torment causing them to rely on one another for love and support.  Now, though, their relationship is one of mistrust and growing distance.  But an opportunity has arisen; one which Karmel has been handpicked for by her brother, a mission of extreme secrecy and utmost importance to the Chameleon God.  Perhaps a way to prove herself and earn her brother’s confidence back.  The only drawback is it involves sabotaging Dragon Day!

For those unfamiliar with this most momentous of occasions, Dragon Day is when the mighty Dragon Gate (which bars dragons from entering the Sabian Sea) is raised to allow a single (or handful) of the vicious sea monsters entry.  Awaiting said dragon(s) will be the mighty of the mighty of the land; their flotilla of warships armed for a sporting dragon hunt, where the prize is both the precious dragon blood as well as the famed heaped upon the dragon slayer.  This spectacle both entertainment for and a lesson to the masses, reinforcing annually why the Storm Lords hold sway over the Sabian Sea.

This years Dragon Day is even more monumental, however, as it heralds the end of Imerle Polivar time as Emir of the Storm Council.  But she does not intend to relinquish power quietly.  At least, all the rumors whisper such.  These people say she is plotting to keep her position against the will of the other Storm Lords — no matter the cost.  Calista Agenta Webb and her father becoming unwittingly involved in the whole affair when all they had come to court for was the payment of reparation, but instead find themselves attempting to unravel an intricate web of deceit which might lead back to the Emir.

And if that was not enough, mysterious earthquakes continue to slowly sink the city of Olaire into the sea, even as the other Storm Lords begin to appear unlooked-for at court and an assassin begins to kill water-mages.  Septia Kempis Parr (think detective) put in charge of tracking down the killer and discovering why it is occurring.  All of it heralding that a violent storm is about to erupt over the Sabian League on Dragon Day.

There are many, many things to love about Dragon Hunters: a detailed narrative, crisp writing, interconnecting plot lines, unique characters, and a mesmerizing world.  This makes it difficult to isolate one element and point to it as the shining example of Mr. Turner’s writing craftsmanship and hold up as the reason why you should read this novel.  Instead of trying, I will simply favorably compare Mr. Turner to epic fantasy authors such as Steven Erikson, Joe Abercrombie, and others of the like whose fantasy worlds transcend fiction and becomes living, breathing places, which you the reader might believe are actually alternate history, because there is no way worlds so complex, so realistic could have come from the imagination of a writer.  And if that is the type of fantasy you adore, then Dragon Hunters is exactly what you have been waiting for.

If there is any criticism to be leveled at this book, it is the complexity, interconnectivity, and details of the story which might drive some readers to madness.  Simply put, this is a narrative which challenges a person to stay focused, not overlook any event, and constantly seek hidden meaning in even the most trivial of circumstances.  Only by maintaining such concentration can one see and appreciate the way Mr. Turner weaves all the narratives into a seamless tale.  That isn’t what every fantasy fan is looking for in their reading, and for that reason, Dragon Hunters might not be to everyone’s tastes.

Sweeping, complex, and exciting, Dragon Hunters takes its readers from the water domed halls of the Emir to the nerve-wrecking guardrooms of the Dragon Gate, from the drowned streets of Olaire to the ocean sprayed decks of dragon hunting ships, from the confused, desperate mind of prisoner Senar Sol to the logical,  methodical investigation of Septia Kempis Parr.  Each scene, each revelation, each plot building upon the others, slowly erecting a grand story which spirals out wide only to steadily contract back to an explosive conclusion where Mr. Turner unveils a grand finale which takes several chapters to wrap up.  The ending satisfying (A fitting reward for staying the course.), but one which leaves several important questions unanswered, elegantly preparing the path for book three — which I personally can’t wait to read!

Tor and Marc Turner provided this book to me for free in return for an honest review. The review above was not paid for or influenced in any way by any person, entity or organization, but is my own personal opinions.