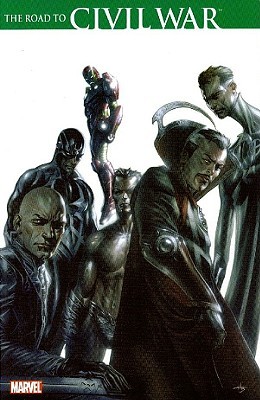 The Road to Civil War by Brian Michael Bendis and J. Michael Straczynski

When I started back reading comics, I had a lot of people recommend this one. And after finishing The Road to Civil War, I’m beginning to think they were right.

This comic collection grabbed my attention right away with New Avengers: Illuminati. The classic, old school artwork by Alex Maleev really worked for me, setting the eerie mood perfectly for Brian Michael Bendis’ tale of this super secret group of Marvel alpha dogs who take it upon themselves to decide all of Earth’s important superhero issues. These guys interactions and conversations over the years was interesting as well as being very realistic (at least, in my opinion).

After such a great beginning, I was expecting a lot from the Fantastic Four issues, but what I got disappointed me. Instead of Civil War stuff, the majority of the issues were standard superhero faire with the FF fighting, profiling, and shooting off one liners. Doctor Doom’s appearance livened things up a bit, just not enough to elevate the story. I suppose, this section of Road was okay, but it was such an abrupt change of pace from the Illuminati section that it didn’t work for me. 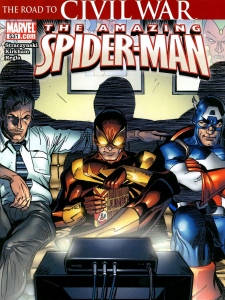 Thankfully, this collection ended on a high note with The Amazing Spider-Man: Mr. Parker Goes to Washington. J. Michael Straczynski’s story was highly entertaining, alternating seamlessly between light-hearted fun, adrenaline pulsing combat, and thought provoking drama. When coupled with the excellent artwork, it did a great job capping off this collection.

So if there is anyone else out there wondering whether Marvel Civil War is worth trying, take my word for it, go find this comic collection, and get into the Civil War, because the superhero and politics angle is too cool to miss out on.

Purchase The Road to Civil War at Amazon.

2 Responses to THE ROAD TO CIVIL WAR (MARVEL COMICS)