Your weekly … I mean, semi-weekly … Well, more like whenever I get around to publishing it list of really, really bad fantasy covers! Please hold down the applauds. Now, we have a great selection for you this time around with some varied examples of what not to put on the front of your fantasy novel IF you actually want people to buy it. So with out any unnecessary explanations, here are my next five nominations for Worst Fantasy Covers!

This book was released way back in 1982. It was a long time ago. We barely had remote controls for our television and had never even thought of handheld cell phones, laptops, tablets, or social media. But it was the BIG 80s, man. We had credit cards, and we were not afraid to max them out. Plus, you have to recall that the we had just risen up from the polyester and disco madness of the funky seventies and were desperately trying to act as if the psychedelic sixties had never happened. Sure, fantasy and science fiction were not in the norm as they are now, but it was beginning to be more acceptable to be seen in that part of the bookstore at the mall. But then, there were covers like this that ruined any attempt to convince your friends that scifi and fantasy were cool. I mean, what the hell is actually going on here? Acid flashback? I don’t know nor have I ever had any desire to find out. After all these years, I still don’t. God, that is a bad cover.
Purchase the cover and all at Amazon.

2. The Sword of Sagamore by Kara Dalkey 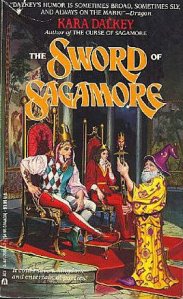 We have a couple sitting around in thrones, looking far from regal as a typical wizard/court jester guy entertains them. Perhaps this scene has something to do with the book itself. Hell, it might even be the penultimate act in the whole fantasy adventure. However, for a cover, this scene is really, really bad for so many reasons. One, the perspective seems a bit off with the wizard appearing to be way too small and the guy in the throne way too long. Two, the colors are bizarre. I can’t describe what is wrong with them, but they seem strange. Plus, the wizard is just so over-the-top in his ridiculous outfit that it ruins any attempt to take this cover seriously. It is just a bad fantasy cover.
Purchase the cover and all at Amazon.

3. The Snow Queen by Mercedes Lackey. 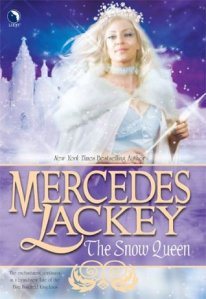 Ms. Lackey has written a lot of novels. She has also had more than her fair share of really bad covers. The majority of the time the problem with her covers was bad artwork. Or to put it another way, the artist did not do a great job of capturing this prolific writers fantastical creations. However, that really isn’t the issue with this book. Nope, the problem with The Snow Queen is that it really, really looks like a cheap romance novel. I know there is nothing wrong with a romantic fantasy looking like a romance novel, since it technically is, but this cover reminds me of the cheap Harlequin novels my mom use to read when I was growing up. What? This was published by a Harlequin imprint, you say. Well, it’s still a bad cover.
Purchase the cover and all at Amazon.

4. The Jewels of Elvish by Nancy V. Berberick

Wow, those are quite the pair of … jewels that the lady in white has there. And yeah, I see that she has an uncanny resemblance to the singer Stevie Nicks back in the 1980s, but I am sure that was just a coincidence. Okay, I know that if you colored the dress black instead of white it would look just like Stevie Nicks twin sister, but there are fantasy creatures spinning around behind her head so that makes this into a fantasy cover, doesn’t it? Anyway, you need to stop worrying about that and focus on the . . . jewels. I mean, after all, the book is about the Jewels of Elvish, so there really isn’t anything wrong with looking at the . . . jewels after all. And no, artists never copy the image of a famous person and put them in a book cover. Those sort of things never happens in real life. Forget that and keep looking at the jewels.
Purchase the cover and all at Amazon. 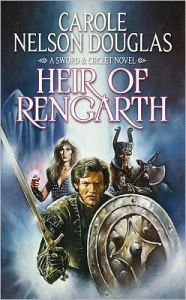 Like I said above, illustrators never put pictures of famous people on a fantasy book cover. That would be cheating, wouldn’t it? I mean, the artist is suppose to create a cover that captures the essence of the characters or environment in the novel, not just throw together a few random images from a famous movie to create a fantasy-like picture. Guess that is why this book cover has a picture of Prince Colwyn from the 1983 movie Krull with Valeria and one of Thulsa Doom’s generals from the 1982 movie Conan the Barbarian behind him. I wonder if this was the movie poster artwork for Krull vs. Conan, and the artist just decided to reuse it once that feature film never saw the light of day. No matter the reason, I have seen all three of these people before somewhere other than in this book.
Purchase the cover and all at Amazon.

That is it, folks. Five, fantasy covers that are bad in different ways. Please, please help me make sure that bad fantasy covers like these stop occurring, because life is too short to have to look at this crap.